Chemistry teams working in small molecule discovery follow an iterative Design-Make-Test-Analyze (DMTA) cycle to design and optimize new therapeutics. Companies commit significant time, finance and resource into new projects and need a clear rationale to prosecute the design ideas through the cycle. A well-defined hypothesis, building upon previous design analyses and wider literature reviews, maximizes the chances of success and return on investment. Each iteration of the DMTA cycle ultimately gives chemistry teams the opportunity to test and evaluate this hypothesis and adapt it to positively steer the direction of the research and eventually deliver clinical candidates. 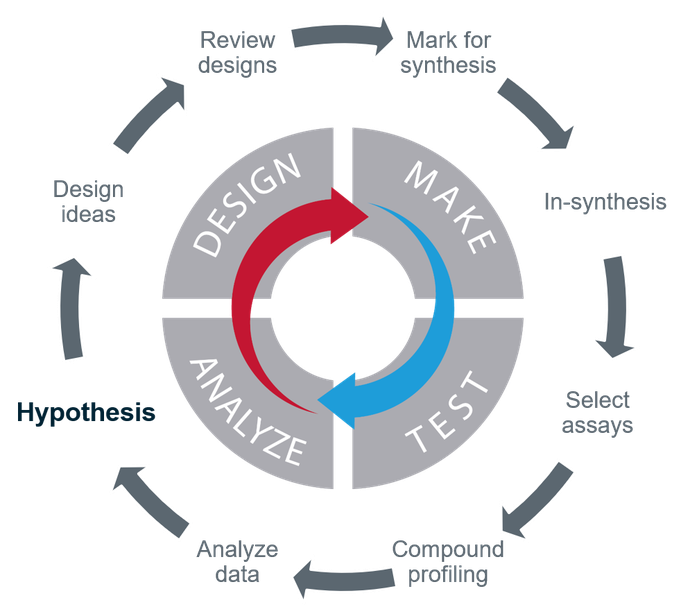 Figure 1: Hypothesis generation and evaluation plays a pivotal role in the DMTA cycle, common to all small molecule discovery workflows.

Hypothesis generation is ubiquitous in drug discovery but rarely managed explicitly. No scientist makes a new compound without a clear rationale for what they are hoping to achieve. However, the hypothesis is often challenging to enunciate and record. In part this stems from a lack of systems for hypothesis management. However, it is also a function of the wide diversity of information sources that are used to generate the hypothesis, including:

Furthermore, a hypothesis is often addressed through the synthesis of multiple compounds – a set – that, taken together, will prove or disprove the theory. Keeping track of this set of designs makes hypothesis management more challenging.

Evolution of the hypothesis

Each step of the DMTA cycle can produce a vast amount of information including data from multiple assays and computational predictions. When combined and analyzed, this can be used to successfully adapt and optimize the hypothesis. Even those results deemed as ’failures’ by not obviously improving upon a molecule or molecules, do provide valuable SAR insights to steer project direction. However, the assortment of document storage systems, emails, spreadsheets and presentations used to capture this information make it inherently difficult to utilize effectively.

Torx™ connects and brings together these disparate information sources into a central platform. Through its pivotal concept of compound set ideation around a design hypothesis, coupled with tracking and communication features, Torx enables teams to query project data, and easily capture the knowledge and hypothesis learning that the research investment has contributed to. This allows teams to make better informed decisions on the next iteration of the DMTA cycle, ultimately reducing the number of iterations needed to develop a clinical candidate.

Summarizing hypothesis learning also makes it easy for teams to pass on knowledge in those situations where team membership may unavoidably fluctuate. It helps with the creation of back up series, an essential component of risk management against late-stage compound failure. Furthermore, it provides a knowledge base to be queried at a future point in establishing for unrelated projects when particular challenges have been overcome, such as ‘tell me when kinase selectivity and oral activity were retained in any new lead series derived from scaffold hopping’.

If you’d like to learn how Torx can be integrated into your project to support hypothesis management and improve productivity, request a free evaluation.